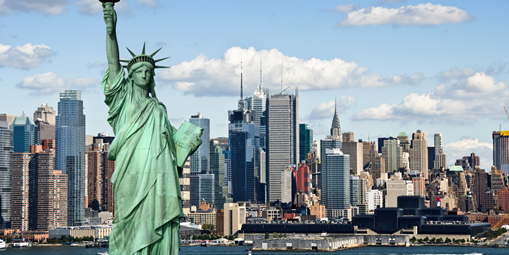 The most interesting facts about the Big Apple

New York City, also known as The Melting Pot because of its great variety of ethnicities and languages, has so many famous highlights that visiting the city for the first time is very much like watching a movie become real life. For those returning a second, third or fourth time the city will continue to amaze you with its little wonders, present on every street corner you turn.

Everyone identifies New York, with its yellow cabs, famed skyscrapers and the Statue of Liberty. But we wish to explain a few less well-known things that will probably surprise you about the city that never sleeps.

1. The city was a 17th-century Dutch settlement called New Amsterdam until the English conquered it and renamed it.

2. Half of all New Yorkers speak a language other than English at home.

3. Over 200 languages are spoken in New York City.

4. The Statue of Liberty was a gift from France to the US in 1886. It became the symbol of immigration during the 19th century often being the first thing millions of immigrants saw when they arrived by boat.

5. New York City has the largest Chinese population of any city outside of Asia.

6. Times Square is named after The New York Times daily newspaper which moved its headquarters to that place in 1904.

7. The first pizzeria in the country was opened in New York in 1895.

8. The strange nitrogen gas tanks you may see on the corners of some streets are used to keep underground telephone copper wires dry so phone and internet services can run without problems.

9. The island of Manhattan derives its name from the language of a Native American tribe that lived in the area. Its meaning is “island of many hills”.

10. You can be fined $50 for placing your bag on an empty seat on the subway because using more than one seat is not allowed (even if the train is not full).

If you would like to experience any of the above then why not take an English courses in New York with Cactus Language. We also offer English courses across the US that are available from one week to a year-long and will give you a great insight into American culture and all that it has to offer.

For more information on any of our worldwide language courses please call us on 01273 830 960 or email us. Our multilingual team will be happy to answer any questions you may have.

Evening language courses: 19 different languages in 10 UK locations
Language holidays: worldwide immersion courses in the country of the language
Private tuition: tailor-made and corporate language training solutions throughout the world
TEFL: teacher training courses for both English and other languages all over the world
Online courses: for teacher training, English and French